Our monastery is located in south central Idaho, ten miles north of Twin Falls and five miles east of Jerome in an area of the Snake River Plain called "The Magic Valley." The Snake River Plain is a large geologic area which extends from Oregon to Wyoming across southern Idaho. It borders the Snake River which arises in western Wyoming and flows across southern Idaho before turning north at the Oregon border to join the Columbia River in eastern Washington. The Snake River Plain is a desert, which has been made fertile by irrigation from the Snake River, its tributaries and the associated aquifer. Between Jerome and Twin Falls, the river is at the bottom of a canyon, 500 feet deep. Upstream a few miles from Twin Falls is Shoshone Falls, downstream is the 1000 Springs area near Hagerman. South of Twin Falls are the hills and mountains which separate Idaho from Nevada. North of the monastery is Sun Valley, a resort town famous for its ski slopes. There are several additional places of interest in the area: Craters of the Moon, City of Rocks, Hagerman Fossil Beds, the Minidoka Internment Camp site , where over 10,000 persons of Japanese descent were housed during World War II, and Three Island State Park at Glenns Ferry, which is one of several places where the Oregon Trail is still visible. Almost all of these places are within 75 miles of the monastery.

The Magic Valley is an important potato producing region. More recently, dairy farming has become the predominant agricultural activity. Sugar beets, barley and other crops are still important. In our area, and in Idaho generally, Catholics are about 17% of the population. Immigrants from Latin America are an important component of the Catholic population of the Magic Valley.

One of the 1000 Springs near Hagerman As you travel through the Hagerman Valley, you will realize the diversification of this magical land. Trout farms, tropical fish research centers, alligator farms, watermelons fields, hot springs and fossil beds are just a few of the amazing things you will discover in the Hagerman Valley. Niagara Springs State Park, along the 1000 Springs Scenic Route, offers year-round sport activities bird watching and photo opportunities. The springs shoot out of canyon walls at 250 cubic feet per second. Beyond the park, Crystal Springs Lake offers picnic areas and fishing. Visit the Hagerman Fossil Beds National Monument Visitor Center located in the town of Hagerman. Exhibits include fossils over 3 1/2 million years old.

Known as 1000 Springs, this area is drenched with artesian water from the Snake River Plain Aquifier, a 10,000-square-mile underground reservoir. As the water flows through porous rock and cinders, it is filtered to sparkling perfection and warmed to a consistent 58 degrees Farenheit. The springs are thought to be the reappearance of Lost River which sinks into the lava fields near Arco, 90 miles northeast. It emerges above ground as crystal clear springs which cascade from the canyon walls and bubble up from the river bottom.

The vast supply of consistently warm spring water which flows throughout the year provides the perfect conditions for rearing many species of warm and cold water fish. 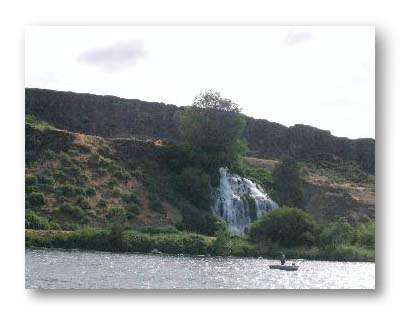 Tumbling down the canyon side at 250 cubic feet per second, Niagara Springs is a sight you won't soon forget.

The churning water is the icy blue of glaciers. The springs are a National Natural Landmark and part of the world-famous Thousand Springs Complex along the Snake River.

The park provides your best opportunity to drive into the 350-foot-deep canyon, but be cautious: The road is narrow and steep. We advise you not to risk it in a motorhome or while pulling a large trailer.

Minidoka Internment National Monument is a U.S. National Monument located 17 miles (27 km) northeast of Twin Falls, Idaho and just north of Eden, Idaho in an area known as Hunt. Minidoka is the name of a reclamation project which included the area (Minidoka County gains its name from here as well). The monument is administered by the National Park Service of the U.S. Department of the Interior. It is the site of the World War II-era Minidoka Internment Camp, one of ten camps at which Japanese Americans, both citizens and resident "aliens," were detained as a "precautionary measure" during World War II under provisions of President Roosevelt's Executive Order 9066. Minidoka housed about 7,000 Japanese Americans, predominantly from Oregon, Washington, and Alaska.

The national monument was established in 2001, and as one of the newest units of the National Park System, it does not have any visitor facilities or services available. Currently, visitors see the remains of the entry guard station, waiting room, and rock garden; or visit the Relocation Center display at the Jerome County Museum in nearby Jerome and the "restored" barracks building at the Idaho Farm and Ranch Museum southeast of town.

Shoshone Falls is a waterfall on the Snake River located approximately five miles east of Twin Falls, Idaho. Sometimes called the "Niagara of the West," Shoshone Falls is 212 feet (64.7 meters) high and flows over a rim 900 feet (274 meters) wide.

A park overlooking the waterfall is owned and operated by the City of Twin Falls. Shoshone Falls is best viewed in the spring as irrigation of the Snake River often significantly diminishes water levels in the summer and fall.

Today, Shosone Falls is often just a cliff--as irrigation has stolen much of the river's water. But early in the spring (or anytime in a wet year) visitors can see the landmark just as the sightseeing pioneers did many years ago. 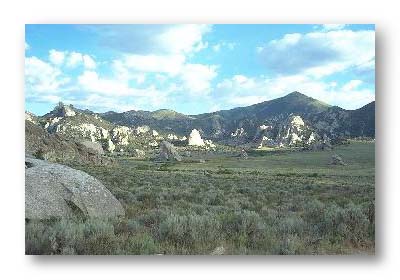 Some of the granitic rock formations here are 2.5 billion years old. They are some of the oldest formations found in the continental United States. The fantastic rocks are shaped by weathering. Many people see animals, faces, or buildings in the rocks. What you see is limited only by your imagination.

City of Rocks is one of the finest granite-crag rock-climbing sites anywhere. About 700 routes have been described to date. One hundred-to 300-foot spires provide most of the climbing opportunities, although there are 600-foot spires which provide all-day adventures. Privately published climbing guides, available for sale at Reserve headquarters, are the best source of information for the serious climber. Check at headquarters for climbing restrictions. The City of Rocks area was an important landmark on the California Trail. Pioneer diaries from 1840 on describe the rocks in vivid detail as "a city of tall spires," "steeple rocks" and a display of "all manner of fantastic shapes."

Camping is at designated primitive sites. Reservations are available at 208-824-5519.

Craters of the Moon 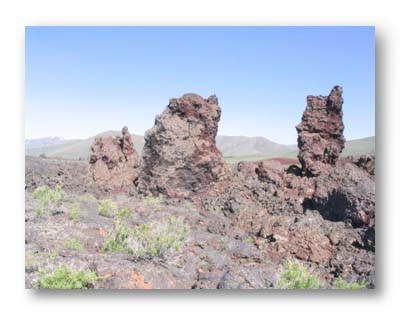 Craters of the Moon is a large lava flow field with cinder cones, spatter cones, lava tubes, volcanic bombs and tree molds. It is located along the north border of the Snake River Plain in Idaho. It was declared a national monument by President Calvin Coolidge in 1924. The monument contains 55 cones with lava flows and 14 fissures, many of which have spatter cones. Many of the cinder cones are higher on one side due to strong winds during their eruptions. The Great Rift is a line of cones and lava vents that runs for 13 miles (21 km) through the monument. Fissures from this rift are the vents for the youngest lavas in the area. The youngest Craters of the Moon lavas are approximately 1500 to 2000 years old. These lavas are basaltic.

A sea of lava flows with scattered islands of cinder cones and sagebrush characterizes this "weird and scenic landscape" known as Craters of the Moon. Craters of the Moon National Monument and Preserve contains three young lava fields covering almost half a million acres. These remarkably well preserved volcanic features resulted from geologic events that appear to have happened yesterday and will likely continue tomorrow...

In 1924 the National Park Service began the job of protecting the park and welcoming people to experience this area. In 2000 the Monument was expanded to include most of the Great Rift, the source of the lava flows that created this unique landscape. Today's more than 750,000 acre National Monument and Preserve is co-managed by the National Park Service and the Bureau of Land Management.